Out of Reach – Monster & Madman 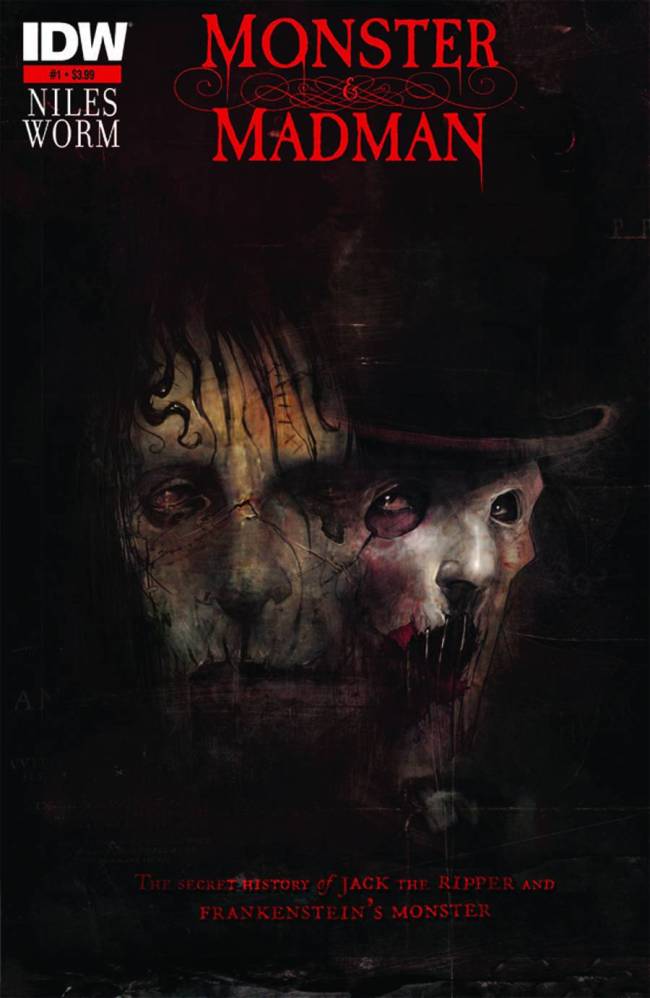 Steve Niles, creator and purveyor of many things macabre, thankfully had the idea to bring two of the most infamous characters of all time together in one book and what resulted was a story both dark and morose.  He could have gone the Dracula route, being overly familiar with vampires and all, or used the Hunchback or any number of historical figures both real and fictional, but he chose to use Frankenstein’s Monster and Jack the Ripper and it is surprising just how well it is that they fit together.  How this had never been done before is a mystery.

As everyone should rightly know, the creature that Baron Frankenstein created was cobbled together from the remains of freshly dead bodies and then brought to life through the power of electricity and genius.  The monster represents both life and death simply through being.  Jack the Ripper on the other hand, is one of the most notorious serial killers in all of history, if not the most, and holds the power of life and death in his hands.  It is speculated by police at the time, and most scholars that he was a doctor and that is the representation we are presented with in this book.  If there were two perfect characters to cross paths, these two monsters would be it.

This particular story finds Frankenstein’s Monster crossing paths with the good doctor after being hounded in the streets of London.  Having just come unto the city after taking passage on a ship from Norway, he is not at all surprised by the actions of the local populace.  While he was out and about the creature did find an interest in the relationships of the people he saw, the way they long for companionship and when the Ripper offers him a mate, an Eve to his Adam, in exchange for the chance to study his body, the creature agrees, if only to see if this doctor could be any more successful than the last.

While Monster & Madman might be a short tale, comprising only three issues, it is an effective one as Niles is able to convey the horror and the tragedy of Frankenstein’s Monster against the duplicitous nature and sheer evil that Jack embodies.  To see the two collide as uneasy allies and then as enemies is a work of art, if only in the portrayal of each other’s character traits and how they play against each other.  The good doctor thinks he is the smarter of the two, and in fact smarter than anyone as he is an educated man and he has been killing women and getting away with it for quite some time.  The simple fact of the matter is that the creature is more learned than the good doctor will ever be.  The monster might not be as educated or skilled in the art of lying, but he knows a truth when he sees or hears it and he has learned all he knows through simple observation and betrayal.  There is no better teacher than life.

Damien Worm provides illustrations for the story and combined with the words from Niles, makes this book one of the best non-licensed offerings to come from IDW in at least the last year or two.  Worm’s style is similar to Ashley Wood in many respects, and should be seen as a compliment rather than a detriment of any sort.  Worm’s actually looks a little more polished, like a Tim Burton film come to life upon the pages of the book.  His pencils draw you in and you find yourself studying every nook and cranny, panel to panel, page to page.  It is dark, haunting and utterly beautiful.  It is hard to think of any other artist illustrating this after reading it, as it is doubtful they could do the work as much justice as Worm does.

Together, Steve Niles and Damien Worm have crafted a wonderful, little tale about two different, yet similar people in a tale that leaves you wanting to see what comes next.  It is a little sad to see happiness snatched out of the creatures grasp once again, but his life is one of tragedy and to have it be otherwise goes against the nature of the character.  A nice, large oversized hardcover of this book would definitely give it the canvas to really show off just how beautiful this book looks, and if we are lucky, it is in the works.  Hopefully, this is just the first chapter of a story yet to be completed, but should it stand alone, it is a wonderful piece of horror fiction.