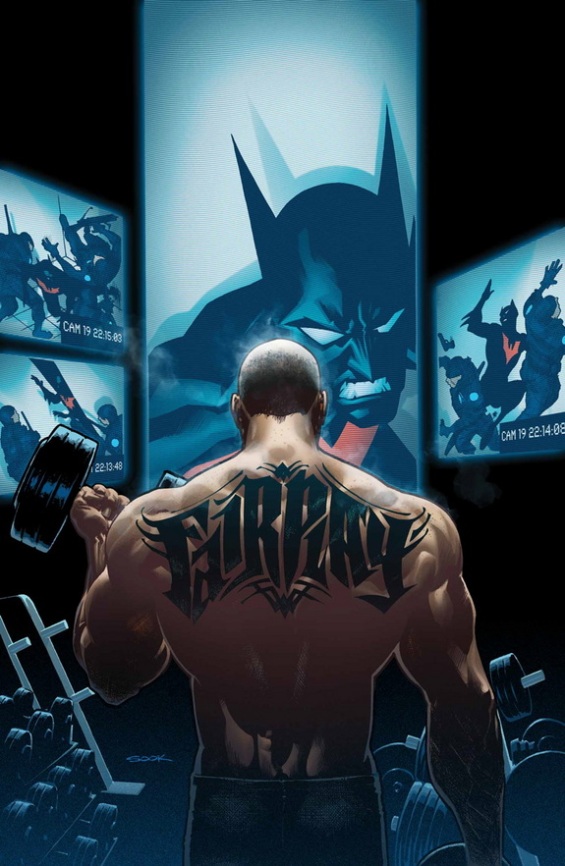 The third issue, technically the fourth if you count the zero issue, does not really do a whole lot to advance the story except introduce some new players to the book.  Frankenstein enters the book, spending time up in the Arctic and being hounded by SHADE while Grifter makes his first appearance in this timeline not doing much except hunting Daemonites.  There is a little bit of movement with the Firestorm plot which essentially turns Ronnie Raymond into a kidnapper by forcibly holding Jason Rusch against his will and it is a character trait that is quite unbecoming of our hero.  Mr. Terrific, who has essentially let money and fame corrupt him, makes an appearance and lets the audience know that he is aware of the Batman from Beyond.  And once again, our writers leave the book on not so much a cliff-hanger as it is a curiosity involving Lois Lane.  Always leave them wanting more is a motto that usually applies to most things in life and this book did so, but not in the way it should have.  Aside from the light plot advances, there did not seem to be any real meat to the story and that is where the want comes in.  After hooking everyone in with issues zero through two, this book was somewhat of a letdown, both in story and in art by Dan Jurgens and Mark Irwin, which just seemed rushed.  Perhaps issue #4 will pick up the ball they dropped with this one.

While Bruce might have the mind of a child, as the Hulk it does not really matter as long as he can still smash things, which is exactly what he does against the Abomination.  Coming to the rescue are the Avengers who have been looking for Bruce and the Hulk ever since he went missing.  They also did not know that Maria Hill was keeping him under wraps and Captain America cannot help but be disappointed to hear it.  As the fight goes on, Waid has it made known that after Bruce reverts back after being in Hulk form, his healing factor had kicked in and started repairing the damage but not completely and was in fact harming him as well.  It was a nice little plot twist as it now creates a dilemma for Maria, the Avengers and Bruce himself if he can no longer transform.  Aside from that, not a lot went on except the introduction of the villain and this being your standard slugfest issue.  I will definitely be interesting to see what happens in the next couple of books to see just how Bruce gets out of the pickle he is in.