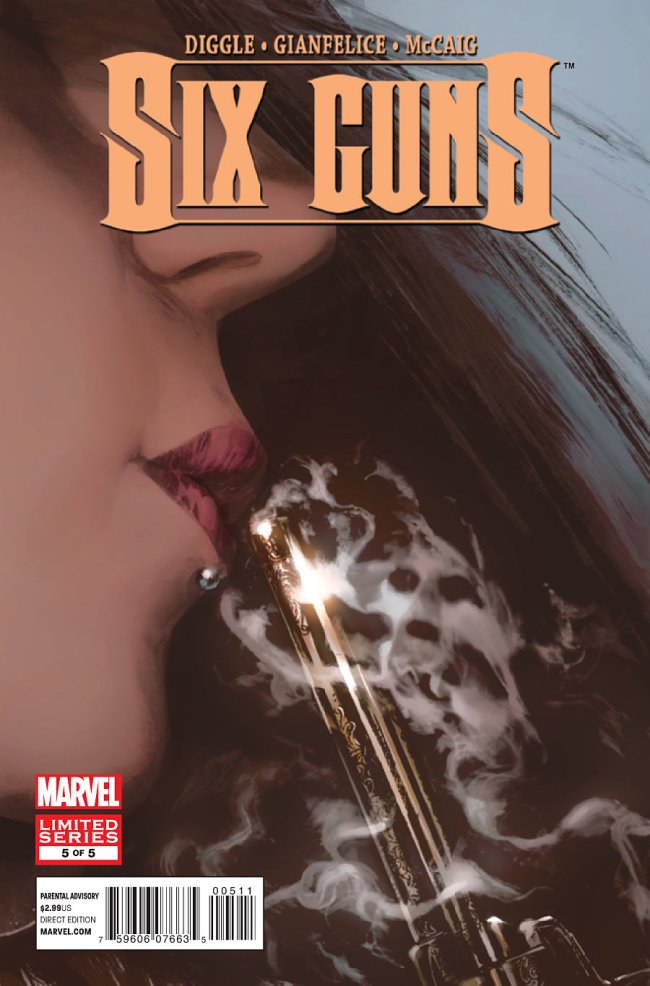 The double-cross. It is never expected and when it hits, it usually hits hard. Any good mystery worth its salt has one and Six Guns by Andy Diggle and Davide Gianfelice is no exception. This book takes some of Marvel’s best western heroes and updates them by imagining what they might be like today to great effect in a one-off miniseries that is an incredible read.

The Black Rider is now a biker in a gang and he also happens to be the subject of the aforementioned double-cross that was mentioned. Tex Dawson is a lawman charged with taking Tarantula in until the Black Rider kidnaps her for his boss. Matt Slade is a bounty hunter always looking for his next score when he sets his sights upon Tarantula and the Two-Gun Kid is out for revenge, but not before he gets the perfect score on the arcade game at the bar. And Tarantula? She just happens to be the girl in the middle of it all.

It was great to see the story play out like so many pieces of the puzzle.  Having the Black Rider betrayed as he was, only set off the chain of events that would eventually lead to our heroes overcoming at the end.  And having them reach that conclusion was a truly fun ride.  The book turned out to be a fantastic blend of action much like Strike Back with the modern west sensibilities of Justified. Throw in a little drama, a little suspense and a share of intrigue and you begin to understand what this book is about. The story never lets down for a minute with its quick pacing and rapid-fire story and you cannot help but be pulled along.

Even though this book might not seem like a Marvel title, as it is very different from most of what they publish, a little bit of the mainstream universe pops in with references to Roxxon and vibranium. Perhaps it was a way to remind the reader that there is a bigger playground then what the book encompasses because it really could have been any company or any mineral that Diggle might have used.

The artwork by Gianfelice is vibrant and energetic with each panel popping off the page which really fits well with the amount of action that takes place. The new character designs are great with each one looking grittier than they have ever been, fitting in perfectly with their new roles in the modern Marvel universe. Slade and the Black Rider are perhaps the most far removed from their original designs, but if you are going to reinterpret characters for a new generation, why have them look like carbon copies?

It is a shame that this series did not sell as well as it should. The heroes were not as clean-cut as what most people would expect and the book did not feature any villains that the reader would recognize, but it only added to the appeal of the tale Diggle was telling. Maybe the book was too different for Marvel fans to latch onto or the demand of updated and modernized heroes was less than editorial thought it would be. The fact is, this turned out to be one of the smartest and most exciting miniseries that Marvel had released in years. It would be great to see Tarantula or any of the others make an appearance in some other Marvel books, though that hope looks to be nothing but.