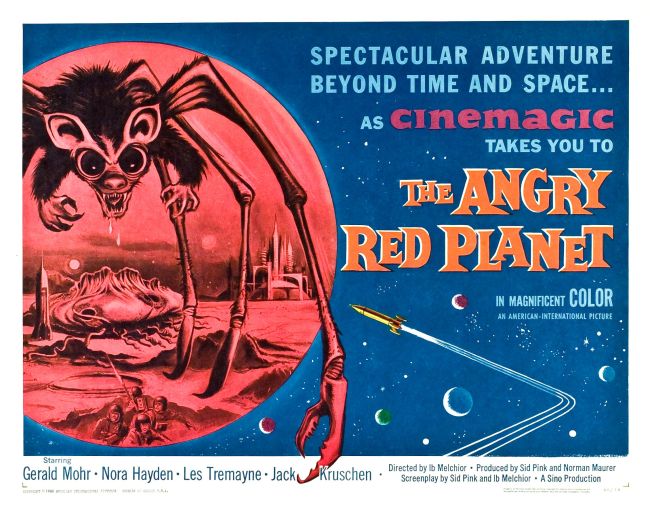 The Angry Red Planet deals with an ill-fated trip to Mars, seeing half of the crew make it home and the other half succumbing to the nameless terrors that resided there.  Dr. Ryan, resting up in bed after the traumatic flight back with an injured Colonel O’Bannion, starts to recount the horrors they encountered upon the distant planet and just how they managed to escape.

Gerald Mohr, who was the lead in the film, could not have been any worse.  As Col. Thomas O’Bannion, the leader of the little band of astronauts, he clung to Naura Hayden’s character as if he was painted on.  He is probably the creepiest, lewdest and most lecherous man to ever appear in a science-fiction movie.  Now whether Mohr was directed to act that way by Ib Melchior, or it was how he interpreted the script written by Melchior and Sidney W. Pink – he should have said something or done something different.  Just listening to him, never mind watching him, could make your skin crawl.  It was barely sexual innuendo as he was basically saying he wanted her and everything she had to give while rubbing up alongside her.  Absolutely terrible.  And what was with the chest hair?  Pretty lax dress code on the rocket.

Naura Hayden was not too bad.  She was not that good either though.  And the same can be said for the rest of the cast.  They were not awful, but they did not stand out very much either.   Les Tremayne was decent as Proffessor Gettell and Jack Kruschen was okay as Jacobs, but with such a bad script, you cannot overly fault the actors for doing the best with what they have.

The effects left a lot to be desired, even for a movie from 1959.  Of course budget played into it, budget and money always do, but how many things did they try out before they settled upon the weird painting/animation technique with the red lens?  The paintings were not actually that bad compared to the creatures portrayed in the film.  The bat-thing was on par with some of Corman’s worst rubber-suit monsters, almost like there was not any effort at all.  In 1959, the effects must have been a little revolutionary at the time, but with Hammer films and other studios coming out with movies made on the cheap that looked like they were made with money, it is a shame that the special effects people could not do any better.

The basic plot and story were good, though nothing we have not seen before so maybe it is a good thing the Martians warned us to stay off of Mars at the end of the film if this is the sort of movie that we are going to make about their people.  Not the best film, and really, not the worst, but there are better ways to spend your time than trying to make your way through this.