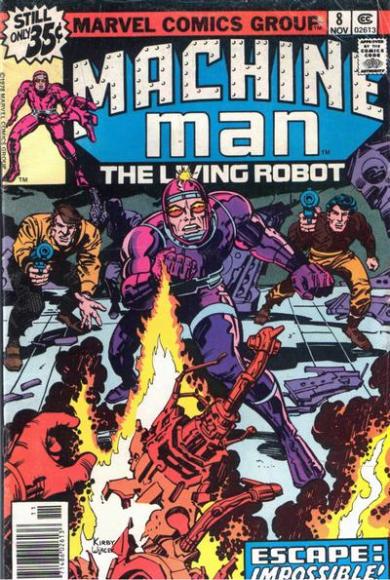 “When they put a super-machine in a super-trap, they have to expect a.. super-escape!”  That is the opening blurb to the latest issue which finds the book returning to form, more like the earlier issues than the latter.  Continuing the storyline dealing with the after-effects of Ten-For’s appearance on Earth and X-51’s response to it, not to mention the fact that he is on trial, not only for that, but simply because he exists, and getting captured by some mobsters; suffice it to say, he has got his hands full.  Now that Dr. Spalding has gotten to safety, it is time for Machine Man to make good on his own getaway.

Kirby pulls out all the stops in this book featuring stronger writing and even stronger art than the previous few issues.  There is a lot of action, some which is over-the-top and yet works wonderfully as it suits the character and the book perfectly.  At times it might be a little dated and the villains a little generic, but it is only a minor thing.  It seems that no matter the situation, X-51 can find some way to manipulate his body to get out of it and remains one of the highlights of the book and something to always look forward to.  Imaginative stuff from one of comicdom’s best.