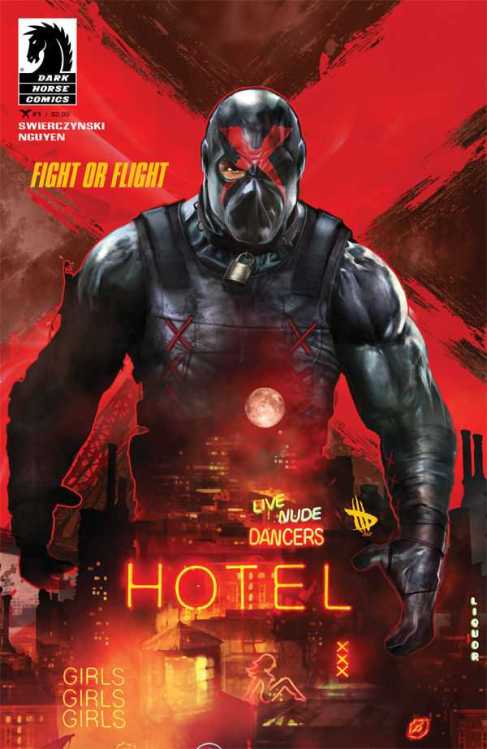 The latest incarnation of the Dark Horse series X, is much like the old one as our hero… sort of, is a man bent on cleaning up his city through the most extreme means.  And he does so with guns, knives, his fists and anything else he can get his hands on.  He is a little like the Punisher or The Spider in many ways, but may just surpass them in the violence department.  A hard feat to be sure, but X manages to pull it off in ferocious fashion.

Helmed by Duane Swierczynski, he crafts a fantastic tale of vigilante justice about an anti-hero that almost seems more beast than man in his methods, but one who gets the results he desires.  X, as we find out is also very methodical, sending pictures to his victims as warnings with their faces crossed out so that they know what is in store for them.  And sometimes he enacts his elaborate plans to a T, but when he has to, he can improvise with great efficiency.  He strikes fear into the heart of his enemies, not because of what he looks like, but because of his actions which in the long run, is a better motive for the corrupt to stay on the straight and narrow.

What is a little refreshing about this book is that it starts everything anew.  It does not hold to the trappings of what has come before and we are given no inkling about any past events.  All we get is a man out to stop criminals by any means.  There is no origin story, which is also a nice change and the book just gets into the action.  This new take by Swierczynski differs from the current norm of superhero fare and really sets itself apart.  There are no flashy capes or outrageous villains – there is one actually, every hero needs one crazy villain – and it seems like heading in this direction will be a good thing for the book.

Eric Nguyen who is the artist on the book turns the story into some pretty dark visuals.  There is a lot of blood and guts and the image of X’s main nemesis, Berkshire done up like a pig is actually a little terrifying.  Nguyen also makes everything in the book look gritty.  Arcadia is a city where no one in their right mind would want to live.  Worse than Daredevil’s Hell’s Kitchen and seemingly even more violent than Gotham, Arcadia is a character unto itself in this tale, which really adds to the story Swierczynski is telling.

There is one little thing that might detract the average reader from picking up the book and that is the accessibility of it.  If you start on issue three, you might be lost.  The book does have the introduction page, which is great, but it just does not seem like enough.  It is really just a minor quibble, but one that could probably be fixed quite easily.

On the whole, the book is good and looks to be headed into a nice long and healthy run, much like its compatriot Captain Midnight.  Swierczynski even manages to inject a little old-school pulp feel as well, hints of The Shadow almost, and makes it that much better.  Always a good thing when a publisher can take a property and turn it around into something better and that is exactly what has happened with X.