Immortality By Any Means – Nothing But the Night (1972) 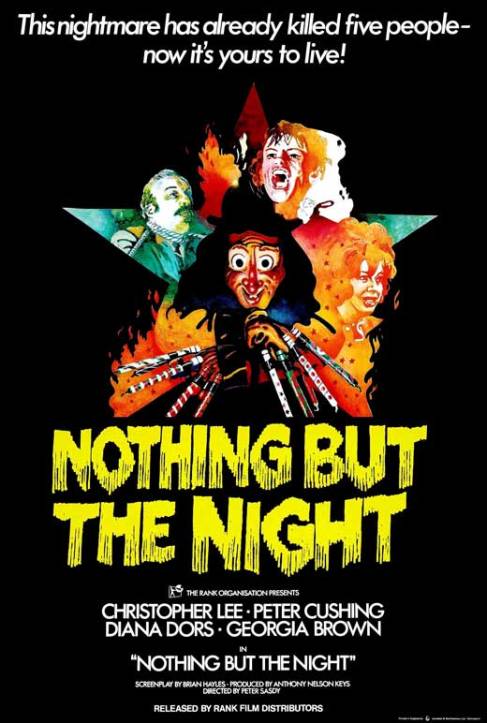 Even though this could be classified as a horror movie, Nothing But the Night is a little light on that particular element.  It is more akin to a suspense-thriller picture more than anything else.  The movie does feature children though, and aside from dolls and clowns, they have to be the scariest subject to base a horror film around.  Not to mention that this film also features two of the Titans of Terror, Peter Cushing and Christopher Lee.  As a horror/suspense/thriller film, it closely resembles The Omen in atmosphere as well as just a little bit thematically.  They both feature a child who is more than he or she seems, they both have an agenda and both will do anything they must to make that agenda a reality, including murder.  The ambience as mentioned is also similar as the film crawls by, slowly building the pace and the tension until the big showdown at the end.  But that is where the analogous elements end as The Omen is about the Antichrist and this film is simply about immortality.

Lee and Cushing bring their usual expert performances to the film.  They know what to do and when to do it.  This go round the two of them are our fearless protagonists, our essential good guys.  It is nice to see for a change, for even though they play the bad guy really well, it is not too often that we see them as such.  Usually they are monsters or mad scientists or upstanding men who are conflicted and misunderstood leading to a downfall of sorts.  Here, they just play straight up good men.  Cushing is Sir Mark Ashley who works in the pathology department and Lee plays Colonel Bingham.  They meet up while investigating the young girl who was involved in a bus crash where the driver lost his life.  They soon discover that there is more to the story and as they do so, it leads further and further into something darker and unthinkable.  Cushing is always the gentleman, no matter the role he plays.  His whole being in every aspect just shouts respectability and he lends class as well as talent to any film he is in.  Lee on the other hand always seems a little shady, like there is more to the story, even when playing the hero.  Together they are one of the best on-screen duos cinema has ever produced.

The film also features Diana Dors, a screen goddess from years past who while not in her prime, does a great job as the mother of Mary, the little girl.  She also plays the titular villain of the piece for the majority of the film until the audience learns otherwise.  She does a great job of it, and it is also nice to see her doing something different than her roles as a sexpot.  Gwyneth Strong as Mary balances her role as innocent and devilish quite well.  She is creepy without even trying to be as she sits in the hospital, but most especially so when she is calm and playing amongst her peers.  She emits an intensity that is unsettling and it is one of those mysteries of film that the characters in the picture never pick up on, but which the audience does.  True, we get more information as a whole than any once character ever does, but that does not mean we cannot still be amazed at the lack of awareness some of them display.

It is a strange thing that the better things in life that are supposed to bring us joy as human beings are those that can fill us with ultimate dread.  That corruption of good and innocence into the twisted, it is something that our minds cannot ultimately understand, and simply refuses to accept, except only as fear.  Children should not scare us.  Yet, many movies feature them as the villain including the previously mentioned The Omen, as well as Village of the Damned, The Bad Seed and Children of the Corn.  Perhaps it is the realization that something that should be so pure can be perverted to such an extent means that anything can, and leaves us little hope.  A great little film from director Peter Sasdy and stars Christopher Lee and Peter Cushing that never fails to disappoint.