Though it might be a part of the ‘Ninja Trilogy,’ it has nothing to do with its predecessor Enter the Ninja, instead doing its own thing and yet turning out to be just as good. From the opening credits, one knows that it is going to be a good film simply by the words that scroll by, namely Cannon Films, Golan-Globus and Sho Kosugi. Also, there is

the title of the film, Revenge of the Ninja which just screams all sorts of action to be had.

That being said, it does not disappoint as the movie has all the hallmarks of early 80’s action films, that being a thin plot, production values that fail to rise above a B picture and a cast who may not be the best actors in the world but manage to get by anyways. In front of it all though is icon Sho Kosugi who carries it all on his back and he does so quite well as the hero who moves to the United States to get away from the ninjas that have decimated his family over the years. Suffice it to say, the ninjas make their way stateside as Kosugi’s boss is smuggling drugs and they want their money. That puts Kosugi and his young son Kane right in the way and thus, just when Kosugi thought he was out of the life, they drag him back into it through violence and death. 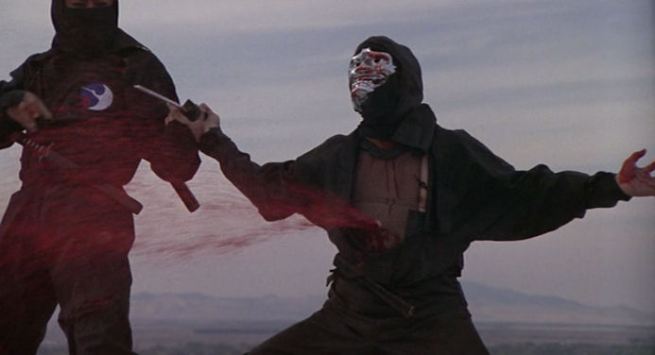 The action, to say the least, is the star of the film aside from Kosugi and there is a lot of it. It begins straight off as ninjas kill the women and children of Kosugi’s family and continues on with more ninjas in the States as well as gangsters who are looking to get their hands on the heroin smuggled in from Japan. Kosugi is in the thick of it all, demonstrating his skills for audiences everywhere and they are impressive. The choreography is fantastic and the film hardly ever slows down for a moment. When it does, there is a bit of cheesy acting which propels not only the story forward but sets it up for the next action sequence.

There are some obvious faults but they are easy to gloss over given what happens during the ninety or so minutes of straight-up ninja obliteration, the best scene being the highly illogical moment where Kosugi cuts a straw dummy in half during the final act, a bit of improbability if there ever were one and yet, amazing all the same. Revenge of the Ninja is the best kind of action movie, one that is predominantly that with little to get in the way and one that entertains to the fullest.