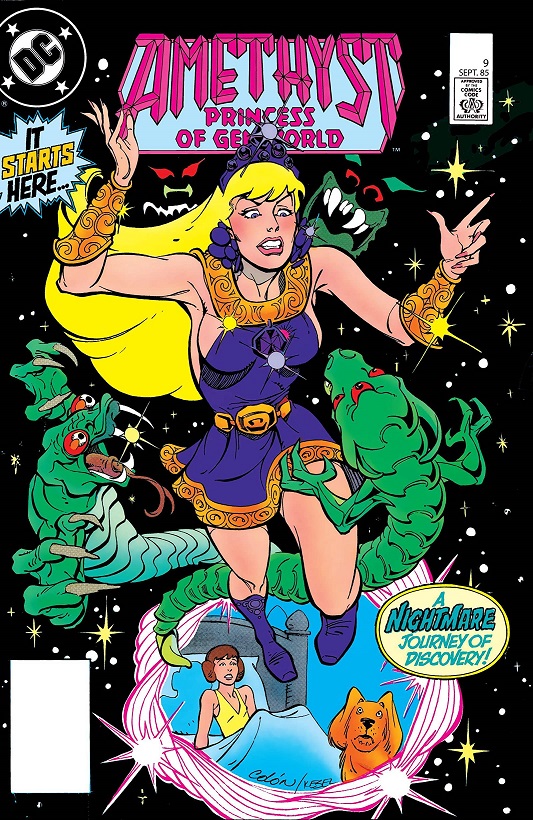 While Amy Winston sleeps a small, imp-like demon sits upon her, a creature called the Dream Weaver who looks to show Amy the truth. As Amy sleeps, writer Gary Cohn takes both Amethyst and readers on a trip to the past, back to the beginnings of Gemworld and he does so in the guise of Citrina in order that Amy puts her trust in him. It is here when the Gemworld is formed, where Citrina who having left Earth, is looking for a home for those like herself and to do so, she must make a pact with the Ancient Ones for only together would they have the power to create an all-new world. The terms are agreed upon, that Gemworld will last so long as Citrina lives, the Ancient Ones not knowing that Citrina would live for thousands of years and thereby growing extremely impatient in the meantime. All of this it seems has to do with the events of the last couple of issues where Amethyst has taken on the mantle of being Citrina’s successor, taking it upon herself to see to the continued existence of Gemworld which the Ancient Ones see as a deal-breaker. As the demon now looks to kill Amy and is eventually stopped, it is revealed that the Ancient Ones had broken the deal first by cutting Citrina’s life short. Astute readers will know that this is going to lead into another big storyline where Amethyst will eventually have to face off against those ancient monsters and if this is the opening salvo, it is a good one. Cohn who takes the reins by himself does a great job with the story and Ernie Colón returns to the book to pencil this chapter. There are of course a couple of other things going on like Carnelian and his scheming and a little more light shone upon Prince Garnet’s return and the reason for it and it all makes for a very well-rounded story. What is good to see is that Amy is full of confidence once again and can pass through to Gemworld on her own now that she is bursting with power. How it progresses from here remains to be seen but it is definitely a step in the right direction.