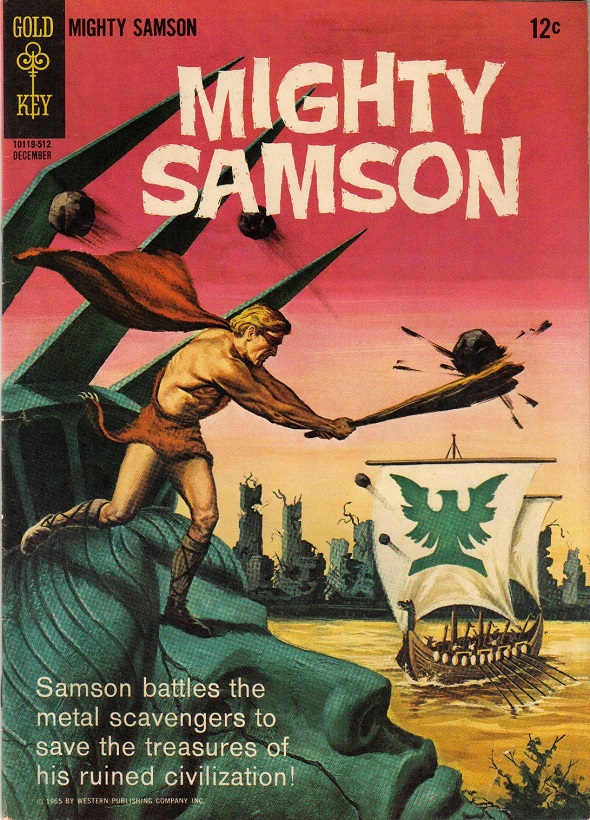 While Samson is out fishing, he notices a ship in the distance and it is a sight to behold as nothing like that exists in N’Yark. Said ship is scavenging for scrap metal and Samson is determined to stop them from plundering his home territory. Be that as it may, the pirates get away and Samson is left to defend himself against a giant frog, which ends up knocking him out in the process. Sometime later as Sharmaine and Mindor are looking for the Statue of Liberty, they run into the same ship who are looking to take the fallen statue back with them and while they are at it, why not take Mindor and Sharmaine as well. Samson sees this from afar and looks to pursue but is knocked unconscious once again by a cannonball from the fleeing ship. As the story progresses, Otto Binder takes Samson down a notch in stature after making him out to be a larger-than-life, almost mythical strong-man. Here, he keeps getting knocked out while failing to do numerous things and it is slightly comical. While it does prove that Samson is indeed a man like any other, he can still do things that most would find impossible and so eventually and after a couple of moments where it seemed like death was more than imminent, Samson manages to make it to Greenlynd where Mindor and Sharmaine are being held captive. Binder and artist Frank Thorne continue to throw obstacles in Samson’s way though and soon he is made a prisoner much like his friends. Soon an ultimatum is given to Sharmaine, to marry Thorr or see Samson die and she agrees but it is not long after that Samson finds himself in an arena fashioned after the Roman Coliseum where is set to face three monsters, each more dangerous than the last. If he can defeat each one, Thorr has assured them that they will all go free. As it is, Samson proves to be as mighty as his namesake and he takes the fight to Thorr after the monsters are vanquished and with Mindor’s help, the day is won and they sail back home with the absconded statue to live and fight another day. This was definitely a fun tale but one that was slightly ridiculous with the number of times that Samson was made to look like a fool.