Though it might have a ridiculous premise, much like many of the films that air on the Syfy network, Stonados which premiered back in 2013 is not that bad when it comes down to it.

The film concerns, as one might guess, tornados that carry large boulders within them. When the movie begins, said tornadoes originate as geyser-like weather phenomena contained out in the ocean, but soon they begin to move inland, picking up all manner of rocks and shooting them out harder and faster than any cannon ever could. They end up causing all manner of damage and deaths and it is up to a science teacher and his weatherman friend to try and put a stop to them before Boston is destroyed.

What is most astonishing about the entire affair is that despite its low budget and ultra-cheap special effects, the film is eminently watchable thanks to some decent acting and a script that was better than it had any right to be. There was a fair amount of drama to be had as scientist dad who knew the tornados would get out of hand, would end up looking for his kids

for the bulk of the picture, all the while made far more entertaining as random people all around him were getting crushed by boulders from the sky. Unintentionally humorous though not the kind of funny that would make a person laugh out loud, it was probably meant to be taken seriously but was simply hard to do so.

Making for a nice surprise was seeing William B. Davis in a small role, though maybe not so much as it was a Canadian production and the man features in quite a few of them, Davis himself also being Canadian. Also onboard would be Paul Johansson in the lead with Sebastion Spence as the weatherman and the weaker of the two. Altogether though, the cast was fairly good and Stonados, as silly as it might seem when it comes to disaster flicks, would be just the same. 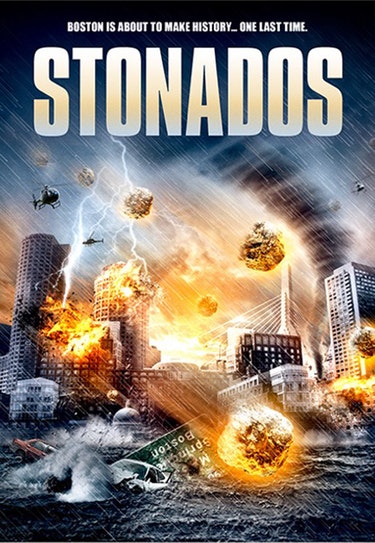