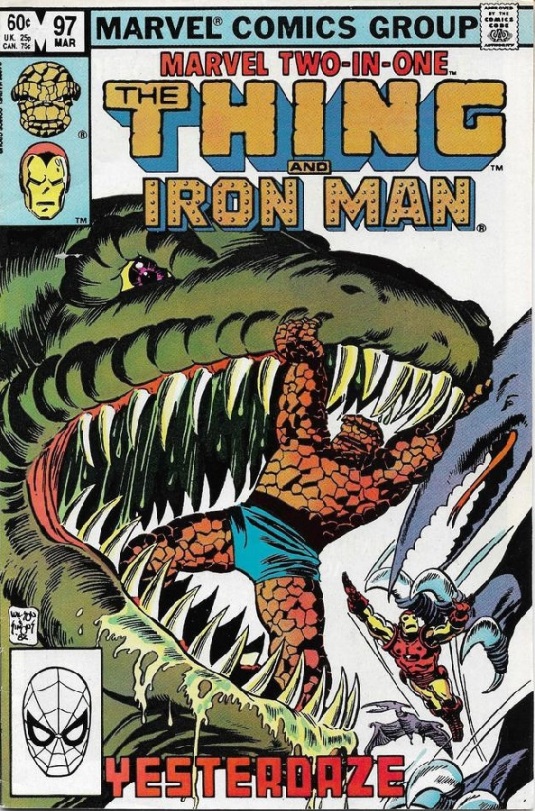 With this issue, The Thing returns to Hollywood once again, not having learned his lesson the previous couple of times he went there so that he can become the star he thinks he is. Reed, of course, is a little wary, but Ben is sure of what he wants to do and so, off he goes. Unbeknownst to The Thing, there are those within the movie industry, specifically one man in particular whom he had angered in his past excursions to Hollywood who wants revenge upon the Ben for ruining his career. Written by David Michelinie and brought to life by Ron Wilson, the last thing readers needed was yet another tale in this vein and yet, despite that, they are given one and it ends up being mildly humorous and packed with a fair amount of action like those previous stories. Joining Ben on his cinematic adventure is none other than Tony Stark and his ‘bodyguard,’ Iron Man who is simply there on business in what can only be called a happy coincidence. So it is that when Ben is doing his scenes, things start to go wrong which is not as strange as all that considering his involvement. Luckily for him then that when some dinosaurs that are supposed to just be special effects turn out to be very real, Iron Man is on hand to lend a hand in disposing of them. As for the man who orchestrated it all, one Ted Silverberg, his film and his production are once again left in shambles thanks to The Thing saving the day. With the conclusion of this tale, it hopefully marks the end, for all time, of Ben Grimm’s adventures in Hollywood. It was not as if they were all that bad, but neither were they all that great being some of the weaker stories the series has sported over the course of its run.