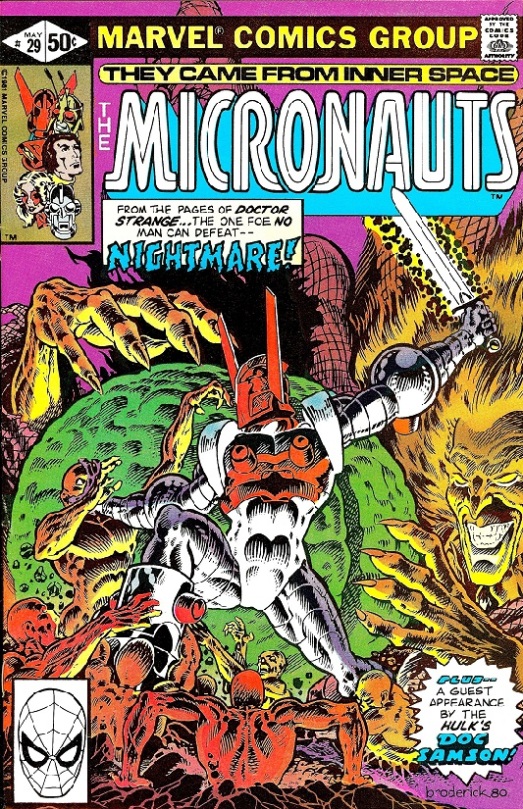 Bill Mantlo and Pat Broderick open the twenty-ninth issue of the book with a note of sadness as the Micronauts and the agents of S.H.I.E.L.D. bid goodbye to their fallen in a joint funeral. Despite the words spoken by Nick Fury, all is still not well as Commander Rann remains in some sort of coma with the Micronauts knowing only that it has something to do with what happened during the battle between Acroyear and Baron Karza. One man who seems to have an inkling of what might be going on within the Commander’s mind is Leonard ‘Doc’ Samson and he believes that if the Micronauts were to shrink down and enter Rann’s brain, they could remove the blockage that prevents him from waking up. Mari is only too happy to do as such and so are Bug and Acroyear and so without any delay, Samson gets to work and before they know it, the Micronauts are where they have never been before. Broderick and Mantlo send the heroes into the familiar, which is strange for them as they thought they would be dealing with Rann’s memories, not their own. There are things present that Rann could never have known about and it confuses them a little bit, seeing people and places that should not be and while they try to roll with it, they know that something is not right. Soon enough, Mantlo introduces the villains of the piece, for there are two – one within and one without. One of them, the reader has already met, that of Dagon, the Acroyear who had already killed Biotron and now looks to finish that which he had started out to do – kill Commander Rann. One thing stands in his way though and that is Microtron and he will protect his own even if he dies in the trying. At the same time, deep inside of Rann’s mind, the Micronauts come face to face with Nightmare who looks to unlock the secret of the Enigma Force. Before entering, the heroes were warned that they could end up dying within if they were not careful, but now that they are aware of what is going on and realise things for what they are, Nightmare’s power is not as solid as he would have hoped. After a bit of a tussle, Mantlo teases readers with a clue, something the Micronauts will have to follow up on and it also provides a hint as to what the next story-arc will involve. With spectacular artwork from Broderick and Mantlo’s always fantastic storytelling, the book remains a consistently great read.