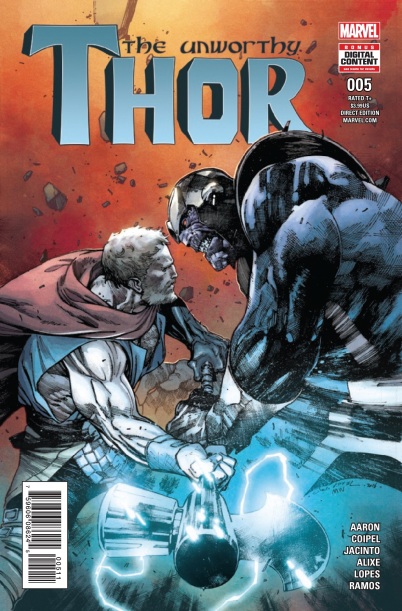 The Story – The Collector likes collecting things and as of late, has been on something of an Asgardian kick. He captured Thori, he gathered up old Asgard and he dared to even add the Odinson to his fabled collection. One of the biggest mistakes he made was the latter and to compound it, he revealed the existence of another hammer – a weapon the Odinson is all too familiar with.

The Take – In the last issue of this miniseries, Jason Aaron and a number of artists finally reveal just who it is that is going to pick up the Ultimate Thor’s hammer and just what was said by The Unseen to make the Odinson become the Unworthy. After fighting for the last four issues, the Odinson has finally made it to the hammer that sits upon Old Asgard and while he could pick it up if he so chose – he does not. It is a bit of a shocker to say the least as that is where it seemed like Aaron was heading with this series, but even though it may not have given the reader the conclusion that was wanted, Aaron gave up something greater – a new mystery with the promise of more action and excitement. Additionally, there is a big revelation in this issue as well, something that will spell trouble not only for the Odinson, but for Jane Foster-Thor and quite possibly, the entire universe. With this book, it marks a new beginning for the Odinson, a man now somewhat content with what has happened, though if given the chance to reclaim his hammer, one has to assume that he would not balk at taking it. While the Odinson may not have become the Thor he once was, that final panel promises another. Who it might be is of course up for discussion, though it is nobody that is currently holds a hammer and there is nothing to say that it has to be an Asgardian as evidenced by Jane Foster. Definitely intriguing to say the least, well-written, well-drawn and well worth the time.