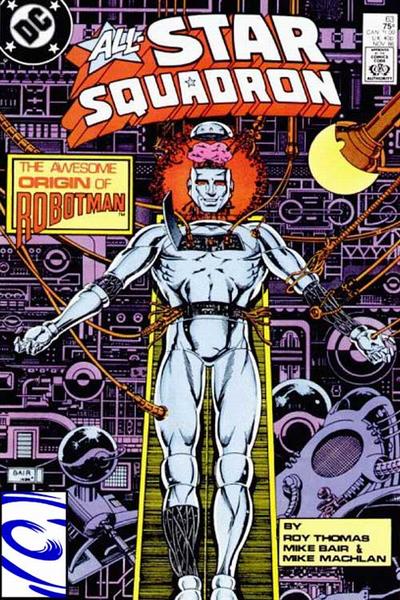 Continuing the series of origin issues, the latest one features Robotman, perhaps one of the most intriguing members of the All-Star Squadron. While his origin has been touched upon before, it never went into the depth that this story does and it is quite fascinating in a Frankenstein kind of way to see just how it all comes about. While the tale is filled with action and self-discovery, there is a bit of tragedy too as once Bob Crane’s brain is transplanted into his robot body, his entire life changes and whether that is for good or bad remains to be seen. For one, there is no going back as his human form has died. Everything that he might experience as a man is now gone, though his experiences of living as a somewhat superior being are just beginning. With his body dead and buried, so is the love he felt for his girlfriend, who thinks he has been murdered and any future he might have had with her is essentially buried the same as his mortal form. The good thing about it all is that we as readers know what will happen to him, that being his adventures with the Justice Society and the All-Star Squadron. One thing that we do not really see in this issue are the psychological effects that being murdered one moment and waking up a robot the next would have on Bob. Though it is has been shown a little bit here and there over the course of the series, another issue to focus on Robotman and his state of being would have been great to see, but being what it is, a superhero title fashioned in the classic sense, that might be asking for a little too much. Though these origin issues have made for fantastic reading, it will be nice to get back to a regular story, if that should be what author Roy Thomas has in mind for the rest of the series which is fast coming to its conclusion. Definitely a really great story and it is nice to see Robotman get the spotlight.